We've recently decided to stop accepting cryptocurrency payments (again) and I wanted to share some of the issues we encountered.

Shodan is a website aimed at technical users and organizations. We have nearly 5 million registered users which makes Shodan one of the larger security-related websites. Around 8 years ago we started getting emails asking us to accept Bitcoin or other cryptocurrencies:

Is there any other way to make a payment other then Paypal.... I have btc or credit card ,but no paypal

Back then we only accepted PayPal so this wasn't an uncommon request. Most of them asked for credit card support but a handful also kept asking us to accept Bitcoin as a form of payment. Eventually we decided to use Stripe to accept credit card payments for the Membership. And shortly thereafter Stripe started experimenting with Bitcoin support. We jumped on that opportunity to now accept both credit cards and Bitcoin. The excitement was short-lived though as we would soon realize that nobody actually paid in crypto. We followed-up with the users that had asked for this and we'd sometimes get a "thanks" but no actual payment. There was interest in having Shodan accept cryptocurrencies as payment but there wasn't any intent on actually making a purchase with crypto. We ended up removing support for Bitcoin after leaving it running for a few months and only getting 1-2 payments.

Flash forward a few years and we decided to re-enable cryptocurrency support as there were more options available now to accept crypto as a vendor and the ecosystem had been around for longer. It was time to see whether more people were using cryptocurrency as a form of payment. The real test for it though would happen during our once-a-year sales event for our Membership. It's a big 24 hours for us and this year was no different. We had 220 cryptocurrency transactions which made up <1% of our total transactions. The assets used for payment are broken down as follows: 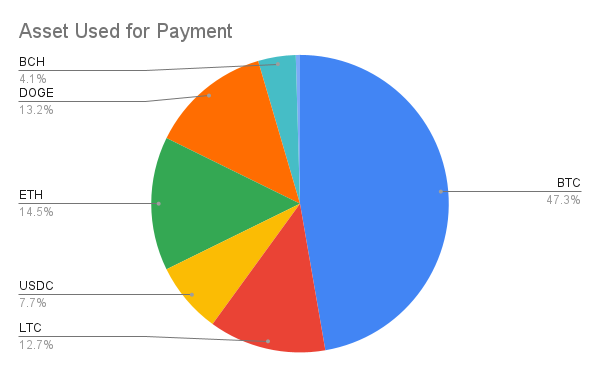 This means that based on our experience Bitcoin is the most popular choice, followed by Ethereum and Dogecoin. I didn't expect Dogecoin to be be that popular and for it to be so close to Ethereum. Of those 220 transactions, 6 of them were underpayments due to volatility in the underlying asset but they were close enough that we accepted them as a payment anyways.

As a result of the above, we received a disproportionate amount of support emails for cryptocurrency transactions which put undue burden on our support team. It's clear that from our perspective crypto is still not widely used as a form of payment. We once again disabled it on the website and maybe we'll try it again in another 10 years.