Shodan crawls a lot of different ports and it's most known for the Internet of Things devices it uncovers, but did you know that Shodan also tracks Minecraft servers? Lets start out by seeing which countries most of the Minecraft servers are hosted in and which provider is most popular. 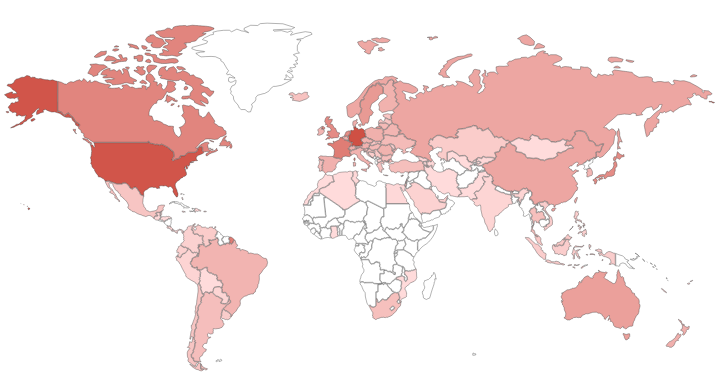 There are around 115,000 Minecraft Servers on the Internet at the moment running on the default port of 25565. Interestingly, the majority of servers are actually located in Germany. And so it's not a great surprise that the most popular hosting provider for Minecraft is Link11. Link11 though mostly just offers colocation/ datacenter services, but looking at the Minecraft banners from Link11's IP space let me know that the company behind these servers is Nitrado. I hadn't heard of them before, but based on these numbers they're the most popular way to host Minecraft!

Want to find a nearby server with a good ping that supports CraftBukkit 1.7.9? No problem, just search Shodan:

The banner returns a bunch of cool information that can let us understand how most people setup/ configure their Minecraft server.

To get started, lets download the data using the shodan command-line tool:

The above command will download all available data on Minecraft servers that were discovered after March 1st, 2015. This means they were recently found and should be representative of what's currently being used. I was curious to see how many players most of the servers support:

The above command takes the Minecraft data, extracts the number of maximum players that the server supports and then sorts/ counts it a bunch of different ways to get the following data:

This means that 42,000 servers allow a maximum of 20 players, which is by far the most popular setting and also happens to be the default. Second most popular is allow just 4 players to connect, followed by 10 players. Most of the numbers in the top 20 look reasonable, but there are plenty of outliers:

In terms of Minecraft versions, the distribution is as follows:

These are the Top 10 Minecraft Versions on the Internet as of March 2015. The most popular server remains vanilla Minecraft version 1.8, followed by a variety of other vanilla versions. At 5th place we have the Spigot high performance Minecraft server with a bit more than 12,000 deployments.

I used a slightly modified version of the earlier command to get the breakdown:

Next time you're looking for a new Minecraft server to visit, give Shodan a try to find what you want :)